On 6 May 2021, the Scottish Parliament will hold its sixth election. I’ve previously polled Scottish Grindr users on independence in 2014, Brexit in 2016, the European election of 2019, and the general elections of 2015, 2017, and 2019. (I also conducted polls for those elections in Wales, London, and London, respectively, plus 2 polls in the United States for their 2016 and 2020 presidential elections.) This time, I asked 992 Grindr users across Scotland who they’re electing to Holyrood. 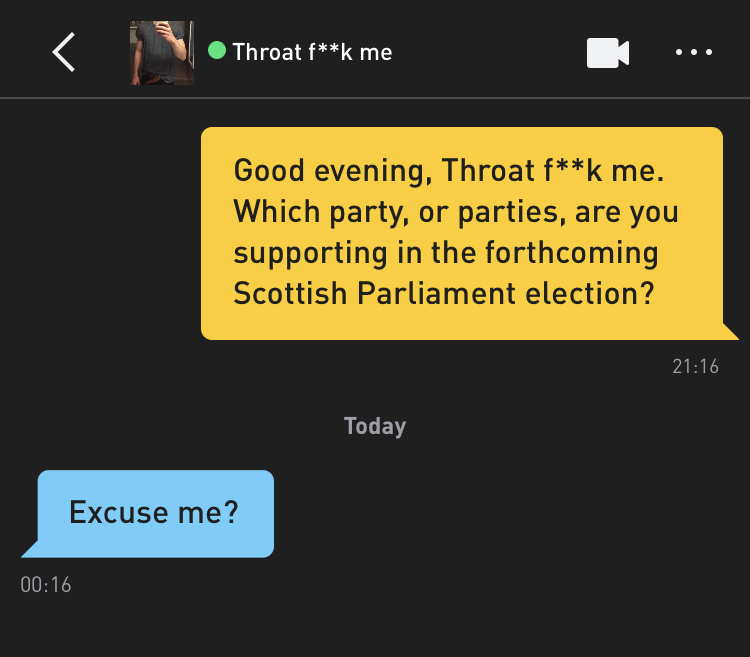 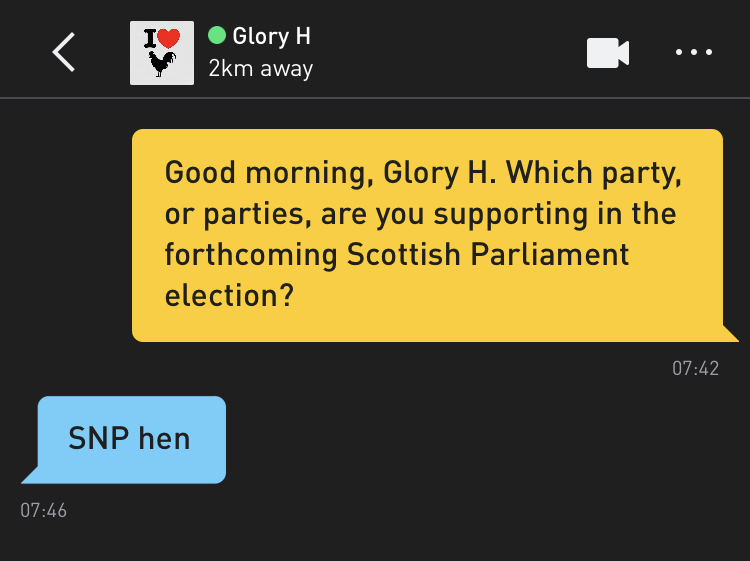 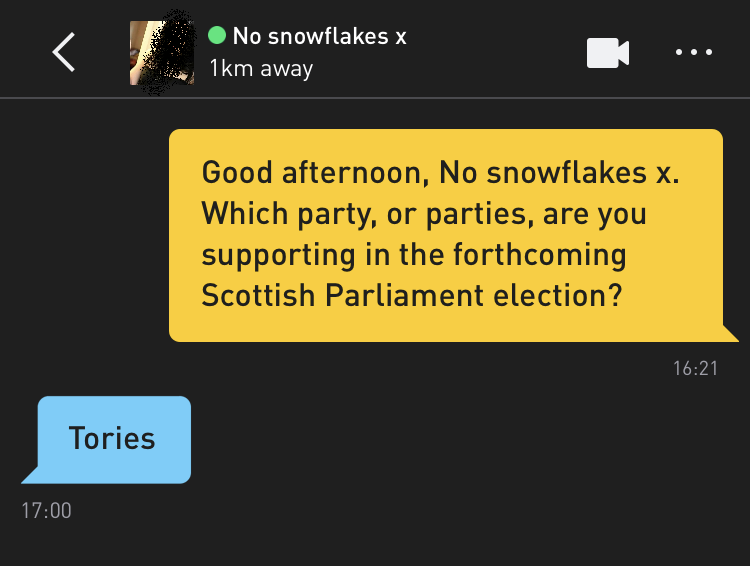 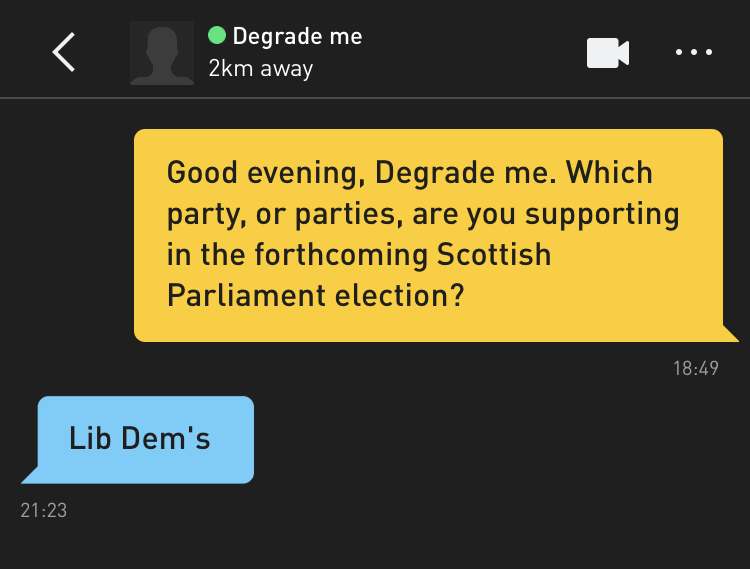 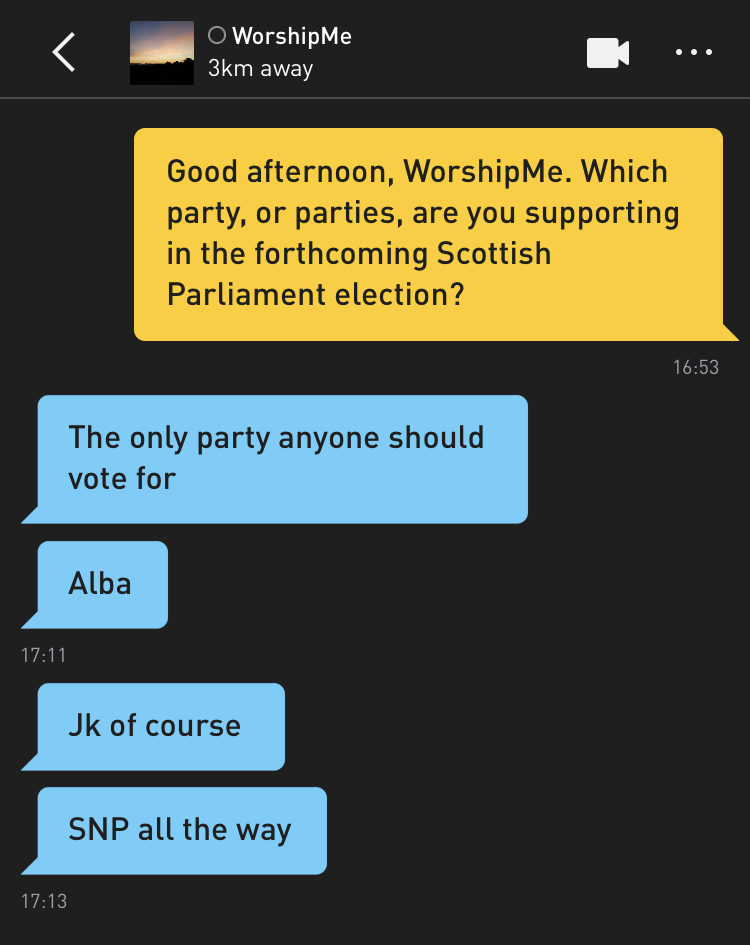 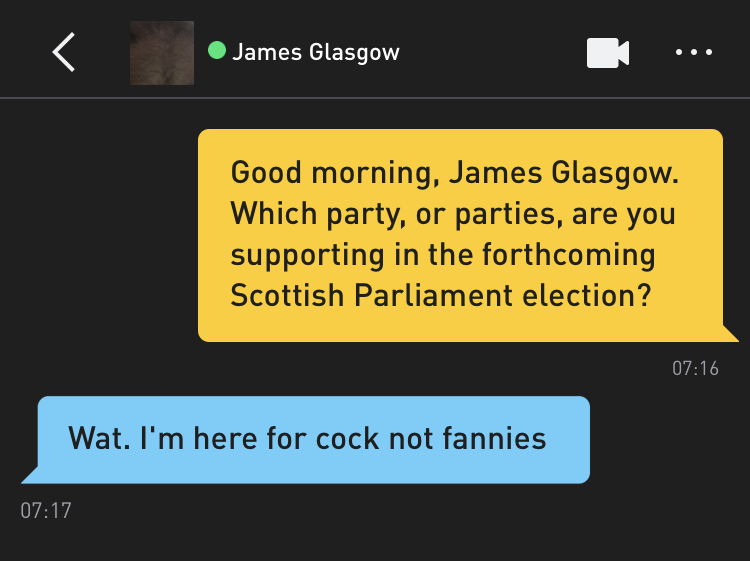 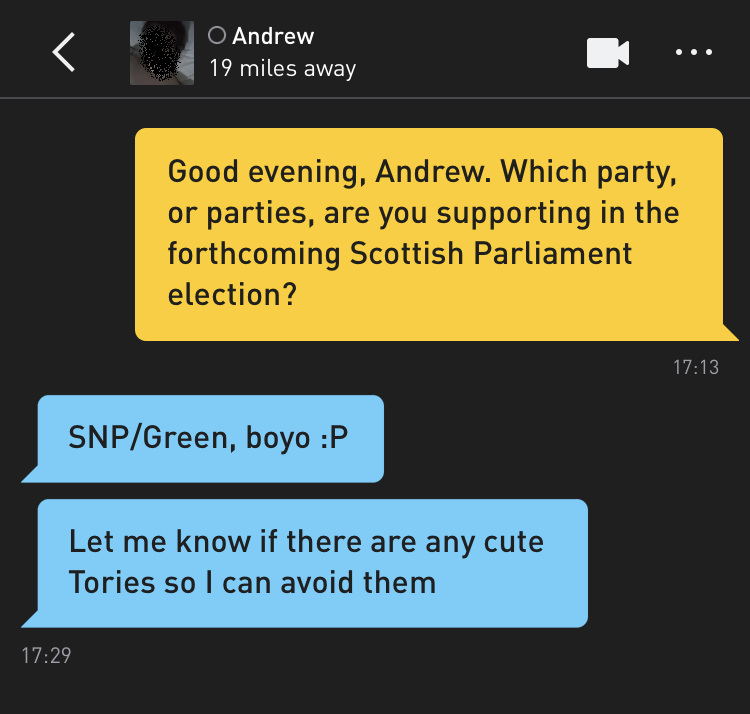 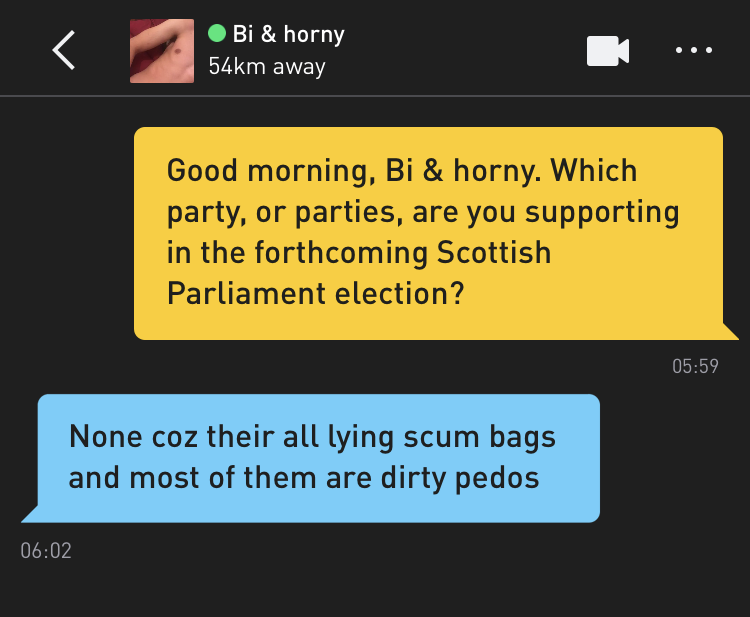 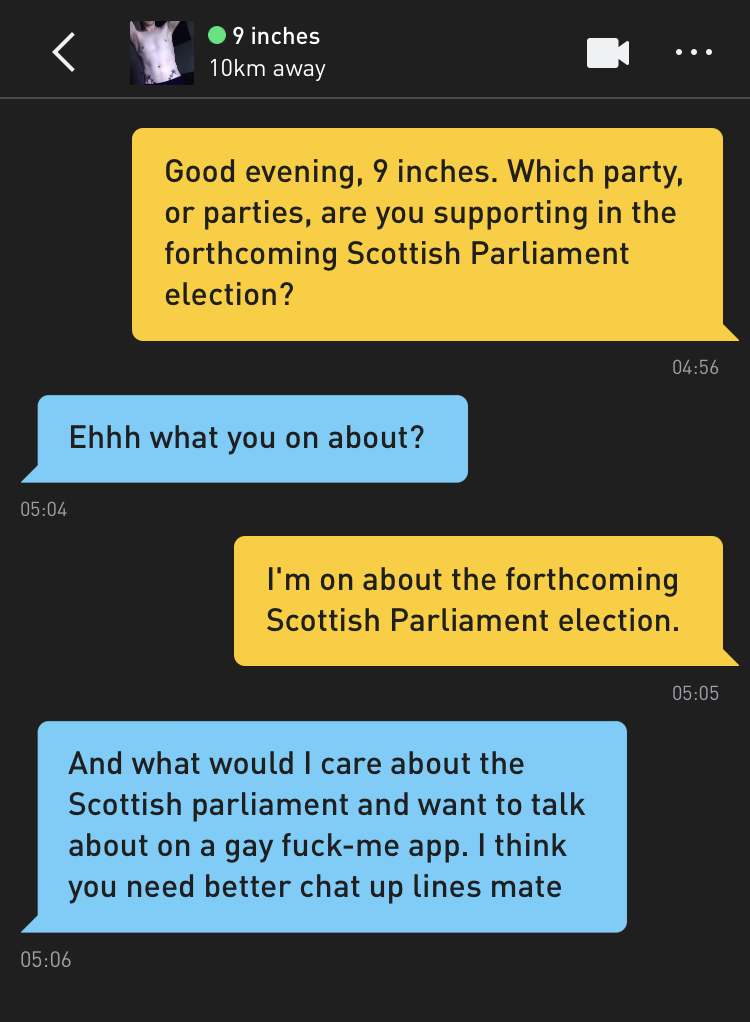 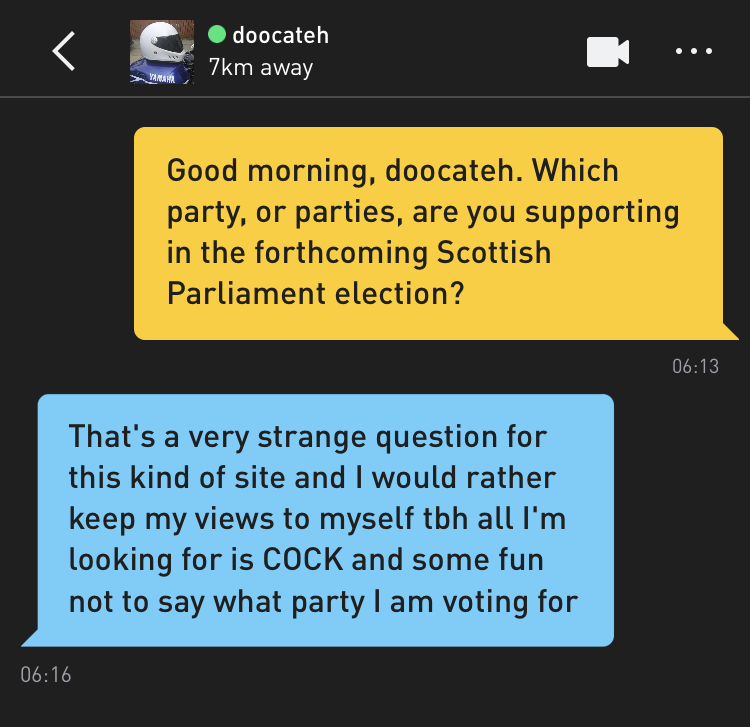 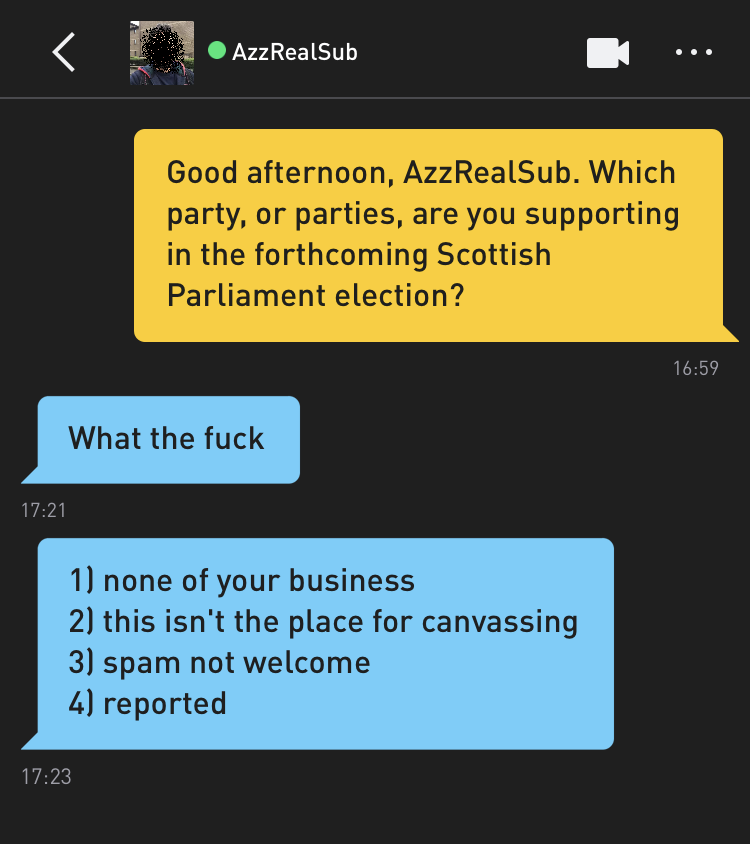 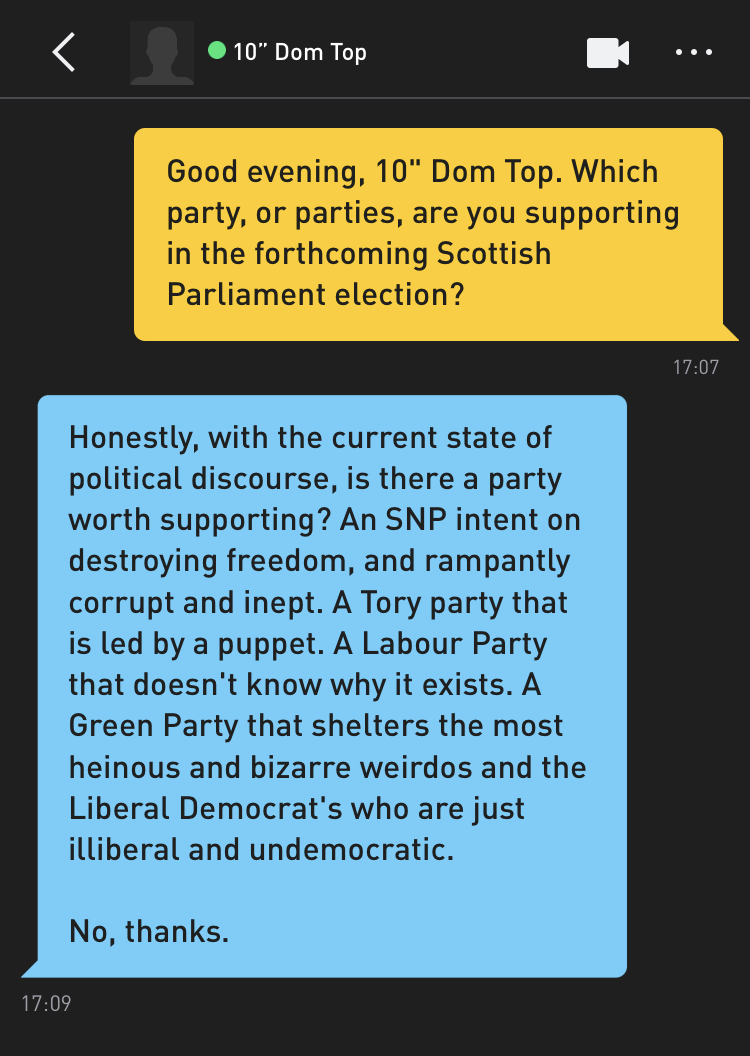 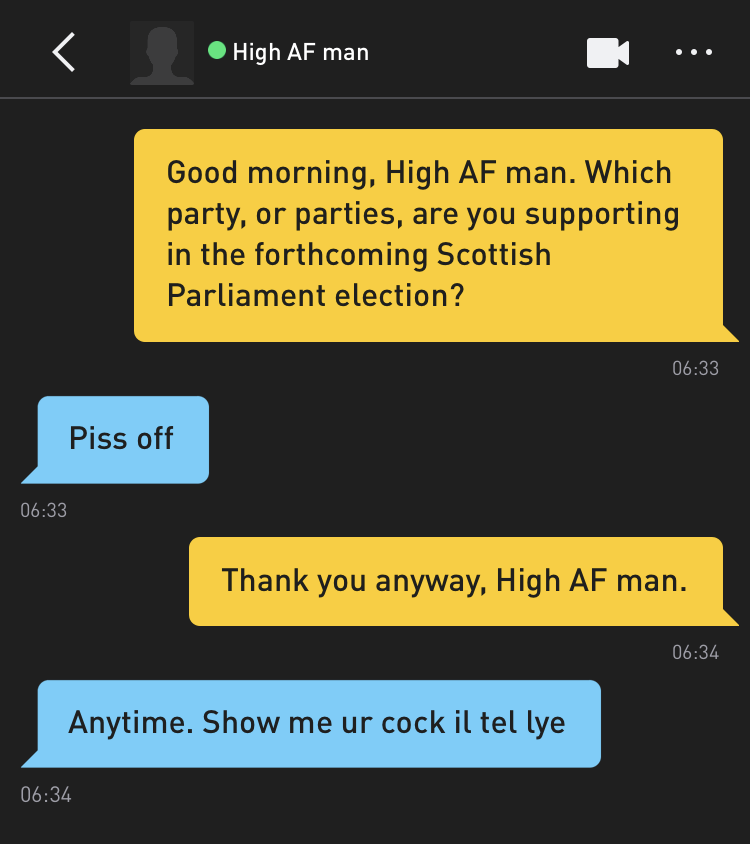 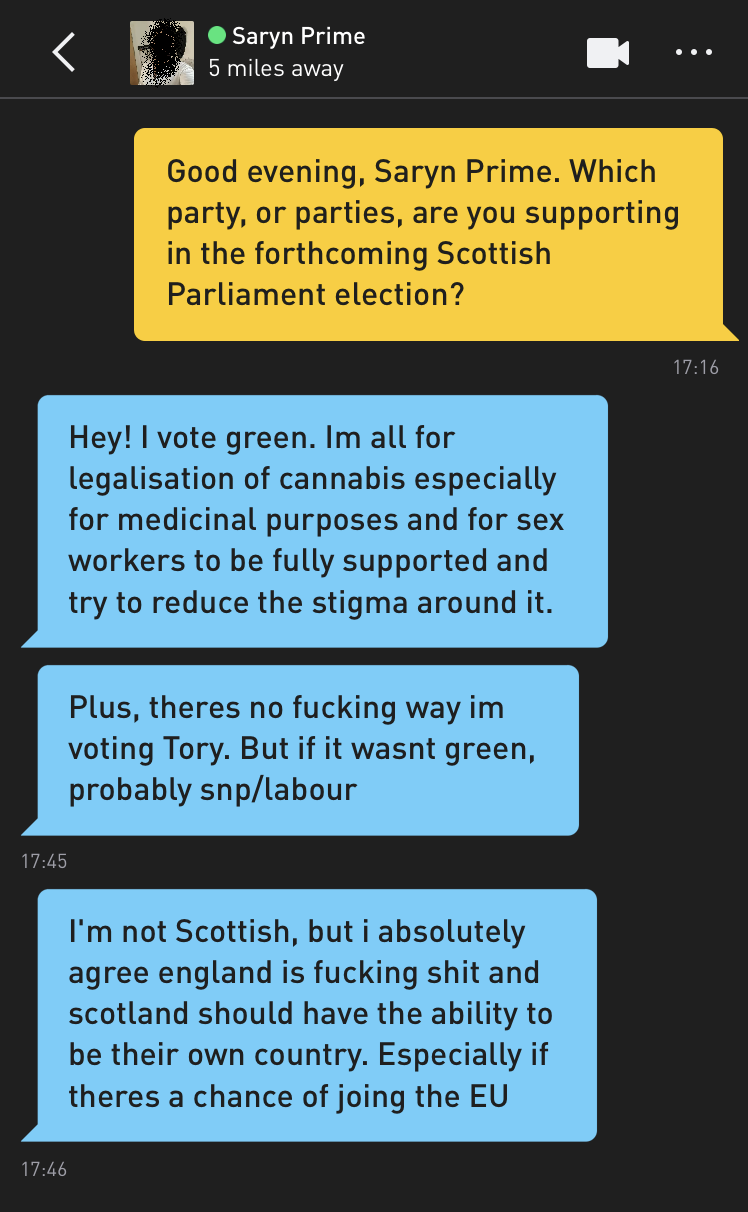 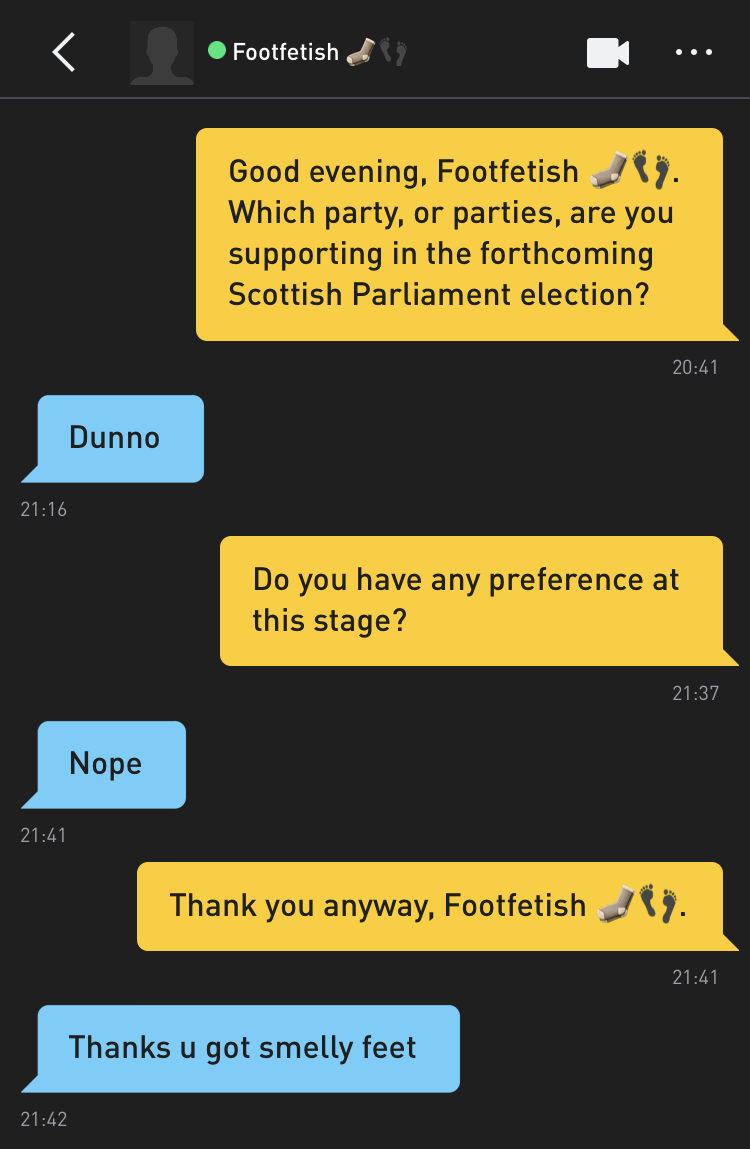 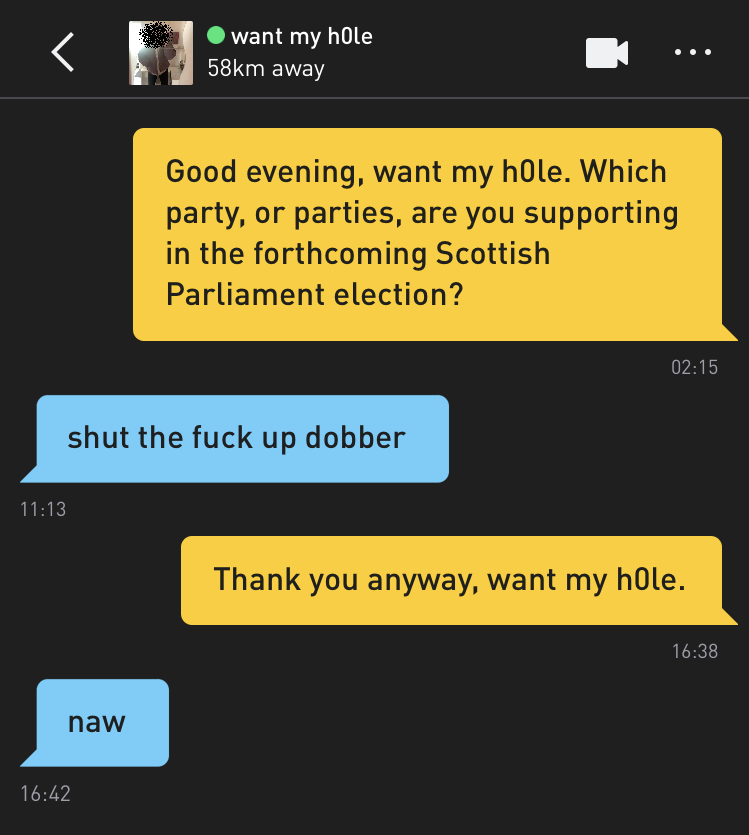 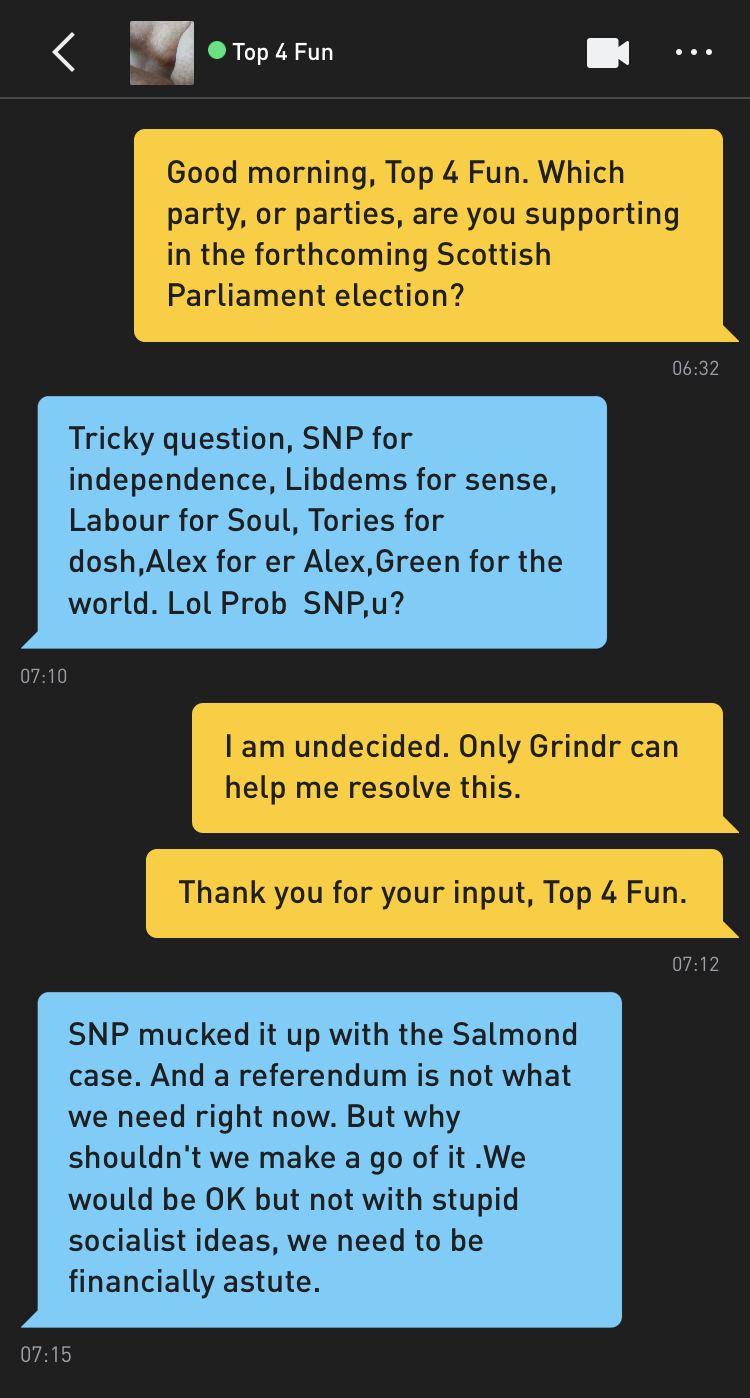 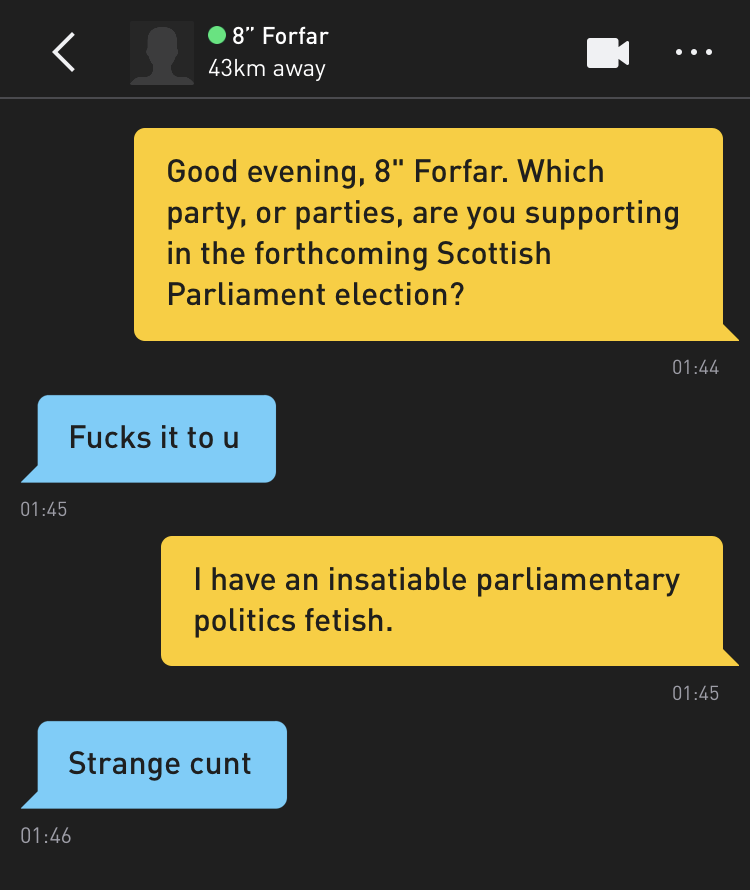 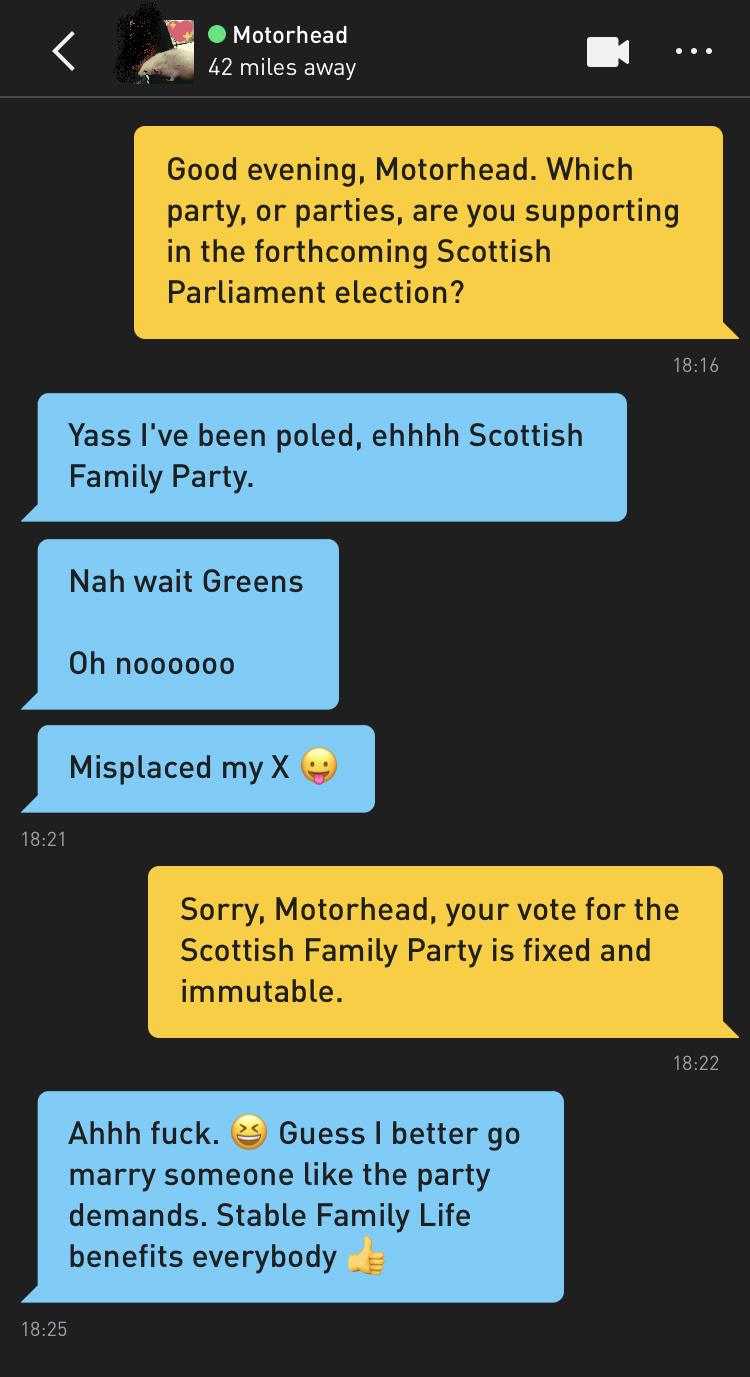 Of the 992 users I managed to question before I gave up evading my Grindr bans, 380 responses were counted. 160 of these users answered with parties (not including joke answers like “The Sex Party” and “The Naked Party”).

Voters in Scottish Parliament elections get two votes – one vote to elect an MSP in their constituency using first-past-the-post, and one vote to elect additional MSPs from broader regional lists using proportional representation. In order not to overly harass users for specific details of their votes, I made the following assumptions: that anyone who replied with only one party was supporting them in both the constituency and list vote, and that anyone who replied with two parties without clarifying which was their constituency vote and which was their list vote was naming them in sequential order – the first being their first vote (i.e. their constituency vote), and the second being their second vote (i.e. their list vote).

This is every combination of parties I received:

*Neither of these votes is possible – the Alba Party is not standing in any constituencies, and the Monster Raving Loony Party is not contesting this election at all.

Here are the constituency votes on their own:

And here are the list votes on their own:

(3 negative mentions of the SNP, and 1 of Labour, came from users who claimed to be disenchanted former voters.)

Not counted towards the percentages are the following responses: